Weird Guns: 11 of the Strangest Pistols Ever 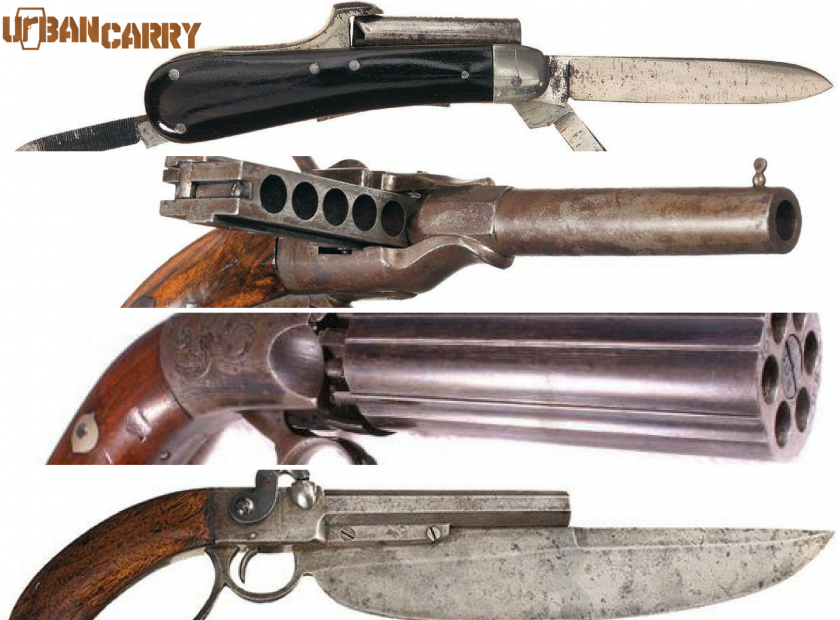 Here's eleven of the strangest pistols we've ever seen. Some are imaginative while others are just comical, but all of them have their place in history. Enjoy Urban Carry's list of the 11 most bizarre pistols in history.

Pepperbox pistols were popular in the 19th century, finding favor with soldiers as backup weapons, and various versions were used for self-defense. They received their name due to their resemblance to household pepper grinders, and just like a pepper grinder, you usually had to rotate the barrels by hand.

Harmonica guns were also known as slide guns, for the simple reason that they featured a steel slide with chambers that contained projectiles. You could think of it as a horizontal magazine that was moved through the chamber, allowing the shooter to fire multiple rounds in fairly quick (for the time) succession.

This was before centerfire cartridges were the norm, so the “harmonica” would be pre-loaded with powder and shot, and a primer would be added to the top of the slide, which the hammer would strike to ignite the charge. There were also some later models that utilized early forms of cartridges, but even with that advancement, these guns were bulky and not very user friendly.

Imagine being in a gun fight, and having to line up the slide perfectly with the barrel, without any kind of guide or notch system to let you know it’s lined up, and then firing, with the potential to have a serious mishap if you didn’t eyeball it correctly.

Not exactly an enhanced combat design. Nonetheless, the harmonica gun can be seen as the inspiration to a magazine fed handgun, and the leap from horizontal steel slide to vertical magazine isn’t a far one.

Having a blade attached to a firearm isn’t a new idea, and as weapons evolved, it was a natural evolution to fuse the two together. Military units today still issue bayonets to combat troops in the event that they run out of ammunition and still have a fight to take care of. George Elgin, the creator of the Elgin Cutlass Pistol, designed this weapon around the design of the famous Bowie knife.

Elgin wanted to take advantage of the popularity of the American hero Jim Bowie, who had died at the Alamo in 1836, just a year before Elgin debuted his new design. While the Elgin Cutlass Pistol was a single shot, smooth bore, muzzle loaded pistol, it packed quite a wallop with a .54 caliber ball and if you were on target, then you’d likely do a great deal of damage.

The idea behind the cutlass pistol was for close quarters battle, and in an era where reloading for another shot could take anywhere from 30 to 60 seconds (that’s a whole minute to get another round downrange), having an huge dagger at the ready could be quite an advantage when you’re standing toe to toe with an enemy on the deck of a ship, which coincidentally, the U.S. Navy saw a need for.

In 1838, the Navy bought 150 of these pistols, some of which made their way on the Wilkes South Seas Exploration, but during the Civil War, the pistols were largely unpopular, causing the Navy to issue the M1860 Cutlass. It seems that for most cases, keeping our blades separate from our bangsticks is more functional.

While there are belt buckles that hold firearms like a small derringer, these belt buckles actually are firearms. Supposedly developed by German inventor Louis Marquis during his stay at a POW camp during World War I, the Nazi belt buckle pistols are somewhat infamous due to their questionable status as legitimate firearms.

Many historians and collectors debate whether the unique pistols were ever even made during the war, and claim that they were post-war pieces that were made by people seeking to profit from Nazi artifacts. Whether or not they are authentic firearms from the Nazi arsenal, the idea is still interesting, and the designs are striking.

There have only been about ten belt buckle pistols found, so they’re extremely valued and collectible, even to those not necessarily interested in firearms. Here’s a great video showing the pretty ingenious design of the belt buckle pistol, and how it functions.

Here again we have the meeting of a firearm and an edged weapon. There are several version of knife pistols out there, the most famous ones being “The Defender,” a folding pocket knife that also had the ability to fire a single round of .22 LR, and the GRAD knife pistol, which was a larger knife that contained a cylinder in the handle of the knife that gave the user six shots of .22 LR.

Sometimes referred to as “squeezer” pistols, the Palm Protector design was invented by French firearms designer Jacques Turbiaux in 1882. There were a few different models of Turbiaux’s design that were produced by Minneapolis Firearms and Chicago Firearms. It was the Chicago model that is probably the most well known, but regardless of manufacturer, these are beautiful pistols and if you’re a collector, these are definitely something worth adding to your case. Rock Island Auction has a fantastic video for us that shows the inner workings of the finely crafted weapons below.

When it comes to concealing that you’re carrying a firearm, having a pistol that looks like a cell phone is about as good a disguise as one could have. There is a lot of controversy around so-called cell phone guns, due to the fact that they are so easily concealed, leaving some with misgivings about how they would be used. Here’s an early video of a cell phone gun, a four shot firearm that looks exactly like an early cell phone.

There’s also an American company, Ideal Conceal, that’s producing two-shot .380 pistols that look like and are of similar size to a modern cell phone. As of this writing, they are still seeking funding, and again there is controversy in Washington surrounding the firearm. Here’s how the Ideal Conceal pistol works:

The Duck’s Foot pistol was designed for a single combatant to fight against a group, and is so named due to its resemblance of a duck’s webbed foot. This style of handgun was sometimes called a volley gun, because it fired a volley of multiple rounds at one time. Try to imagine carrying this gun around; even in a military application, such as boarding a ship, it would be cumbersome and difficult to wield.

Remember also that these were created during a time when most barrels were smoothbore, meaning they were incredibly inaccurate, so they could only be used in extremely close encounters. There were many variations of the Duck’s Foot pistol, everything from 3 barrel versions up to an 8 barreled version that had a spike “bayonet” and spurs on the butt of the grip.

Even though the functionality of the Duck’s Foot may be questionable, especially when compared against modern firearms, some of the pistols were beautifully made, featuring handcrafted details and engravings throughout the firearm.

Jailers’ Keys are an extremely popular collectors item today, but in the 1800s they were hardly useful guns that jailer’s carried on them to protect themselves from an attack by an inmate. At least, that’s how they were supposed to work.

If you did manage to find the right key, light it with your cigar, and accurately fire a shot, the result would be minimal damage unless the shot was placed well, difficult to do in the middle fight surrounded by people who are trying to steal the key ring your gun is on while assaulting you in close quarters.

The Jailers’ Key didn’t have a long life. They were almost useless as a firearm, but that doesn’t make them any less interesting. In fact, they’re almost impossible to find and go for eye watering sums of money as collectors keep them under lock and key. Read our full article on the Jailers’ Key here.

The knuckle duster, or Apache, pistol was a brutish piece of weaponry made famous by the Apache gang in Paris in the late 1800s and early 1900s, and is our runner up for the 11 weirdest handguns. It combined three weapons to make a somewhat cumbersome hybrid of brass knuckles, a barrel-less pin-fired revolver, and a folding knife.

The Apache folded into itself, making it small and easily concealed, which is presumably why the gang members loved it; they could get in most anywhere with it, plus it gave them options when attacking victims. Despite the sinister look of the Apache pistol, they are valued collectors items, going for thousands of dollars at auction.

The Sedgley OSS Glove Gun takes number one on our list of the eleven weirdest handguns, as an interesting combination of unique engineering, utility and at least one story of use in the field, as well as an appearance in the Tarantino classic, “Inglourious Basterds.” Developed by U.S. Navy Captain Stanley Haight and manufactured by the Sedgley Company, the U.S. Navy bought and issued around 50 of these little gems.

The punch guns may have been issued to members of the OSS as well, but again, there is no confirmation of that. The idea was for sailors performing land clearing and construction operations on the Pacific Islands to be able to have full use of theirs hands, and if a threat presented itself in the brush, they would be able to dispatch it quickly. It was also thought that if a ship was being boarded, the sailors would be able to pretend to surrender, putting their hands up or behind their head, and when the enemy was close enough, they could make an attempt to recover the ship or escape.

The Haight punch pistol held a single round of .38 caliber ammunition, fired by depressing the plunger on the front of the gun. Reloading took a bit longer, making dealing with multiple combatants difficult, although wearing two of the glove guns would have have been an option. Just be careful about reaching too quickly for something!

There you have it, eleven of the strangest handguns we've ever seen. Do you know of any weird or wacky pistols that didn't make the grade? Share them with us in the comments, and share this article with your friends on social media!