When Concealment Is Key 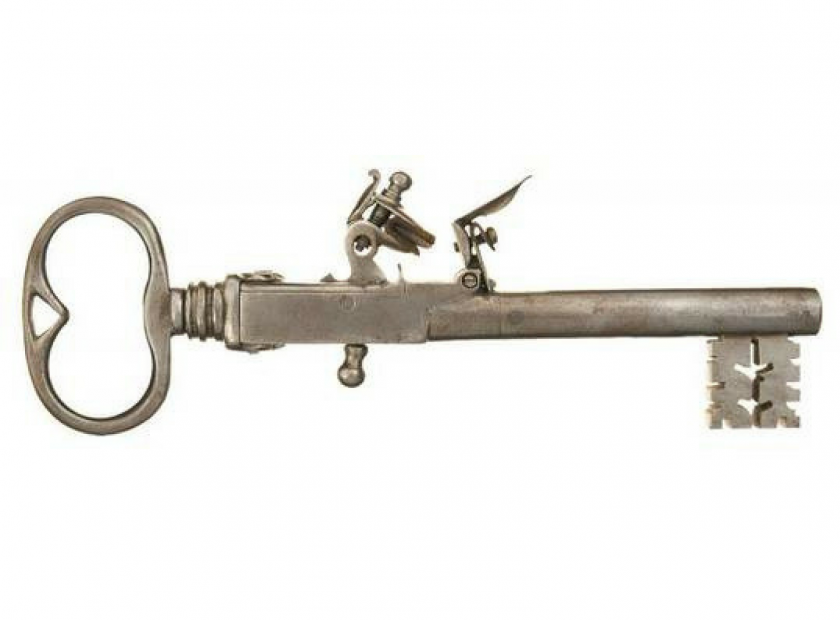 Let’s hop into Doc’s DeLorean and travel back to the Industrial Revolution. Factories popped up in every city, drawing thousands of would be employees. Labor was cheap and safety was never a key priority for employers. Jails saw an influx of “residents” unable to cope with the new landscape, as many new city dwellers resorted to crime as a way to survive. Unfortunately for both prisoner and jailer, these were not the prisons of today. Inmates died from disease, malnutrition, and assault on a daily basis. Both parties had to tread carefully to survive. The jailers, however, saw to it that they had the upper hand in these almost daily skirmishes.

Guns in the traditional sense weren’t really an option; it would be too easy for a prisoner to attack the guard and relieve him of the gun. So the task required something a little more covert, a little more subtle. Enter the Jailers’ Key. An early Jailers Key that fired a .22 bullet - PC

Guns have been hidden in pretty much everything in this point. They’ve been put in pillboxes, pocket watches, rings, canes, and umbrellas. In most cases, this served to help the carrier bring a gun into a place it would otherwise be considered “ungentlemanly”.

Other times it was for a much more sinister reason; an umbrella gun was used to assassinate Bulgarian dissident Georgi Markov outside the BBC in 1978. Either way, these secret guns were meant to be concealed in plain sight and completely undetectable until it was too late.

Schematic of an Umbrella Gun - PC

Well, as you might have guessed, Jailers didn’t carry umbrellas. But they did carry keys. Most Jailers’ Keys were fully functional in that they opened locks and looked just like normal keys.

They were genius in that they were almost impossible to detect, the downside being they were almost as impossible to fire. One simply needed to find the correct key on the key ring, point it at the assailant, and press the lit end of one’s cigar on the tiny hole that covered the powder chamber. Not as quick as pulling the trigger on your Glock 19, but better than nothing.

Jailers’ Keys were unique in that they focused primarily on concealment rather than function. Over the years more “traditional” styles came out. The key was now available with a matchlock, a flintlock, and a percussion cap. While they functioned much better, they had almost completely lost their ability to blend in.

The Jailers’ Key didn’t have a long life. They were almost useless as a firearm, and were easily taken when a guard attempted to use it in a fight. However, that doesn’t make them any less fascinating. In fact, they’re almost impossible to find and go for eye watering sums of money as collectors keep them under lock and key.