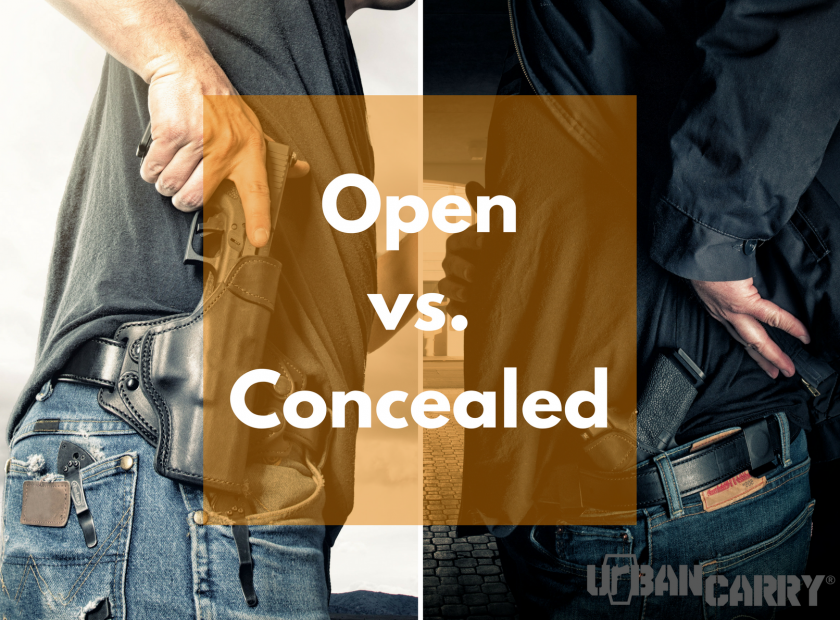 How you choose to carry is up to you and depends on the laws where you live. There are different applications for both open and concealed carry. Proponents of open carry believe that the known presence of an armed citizen will reduce the likelihood of a crime ever taking place, while proponents of concealed carry believe that you become a target and lose the element of surprise. For more specific details regarding both schools of thought, read the full article below.

Which one is better? Is there a better choice?

Time for a classically vague answer: Well, it depends.

First and foremost, it’s important for you to know the laws governing the areas in which you live, work and visit. For example, maybe you’re a concealed carrier living in Seattle, and you’re traveling to Portland to visit Aunt Carrie and Uncle Fred and pick up some organic, free-range, non-GMO, gluten-free beard oil. It’s important to know that Oregon is not a reciprocating state for Washington and that if you continue to carry concealed once in the state without a proper permit, you’re breaking the law. Looks like it’s time to get your Oregon permit if you still want to carry concealed during your trips to Portland.

Here’s another scenario that illustrates the importance of knowing your state laws. Since Urban Carry Holsters is based in Florida, let’s imagine that I’m out hunting alligators, and I’m using a Smith & Wesson 500 as my gator-getter. According to the law, I’m allowed to open carry that firearm while I’m hunting. However, Florida is not an open carry state, so I can’t stop in for a Pub Sub (Florida people know) on my way home from the swamps with the 500 on my hip.

*By the way, this is not professional legal counsel or advice.

Always seek an attorney for a full explanation of your states firearms and concealed carry laws.

Let’s start with open carry, and some reasons why you might want to carry openly if your state allows it. One of the first benefits to open carry is that your firearm is easily accessible. If you’re out hunting, hiking or managing your property, having quick access to your gun can be a literal lifesaver. If you’re attacked by a wild animal, you need to be able to dispatch it quickly and effectively. It is important to note that you do want a holster with good retention, because the last thing you want is your gun falling out of the holster while you’re flying down the trails on an ATV. Personally, I like the ability to easily draw and re-holster my firearm from an outside the waist band (OWB) holster, and you can still conceal the firearm with a cover garment even if your technically carrying openly.

Having lurked on many forums and Facebook groups while researching this topic, it’s clear that a lot of guns owners “simply don’t care how the snowflakes feel,” to put it in the words of one open carry advocate. While this gun owner is fully within their rights to assert their ability to open carry in their respective state, going into the public with that attitude may not be the best form of advocacy for the firearms community.

“We all want to be friends and good neighbors. So just remember, you’re carrying open is considered posturing and how you do it means a lot to all gun owners in the United States.”

The biggest disadvantage to open carry is also the one that makes most gun owners shy away from the practice; public perception. Even those who are pro-gun are likely to cast a few nervous looks at someone carrying a pistol in public. Someone who is uncomfortable with guns is likely to go into a panic attack if they see you.

One of the biggest positive arguments for open carry is that it serves as a deterrent to criminals. However, this is also the biggest criticism of open carry: that criminals are aware that you’re armed. The belief is that most criminals don’t want to get into a gunfight. They just want to get in and get out before the police arrive on scene, so they’ll avoid anything that would impede them.

The natural counter to this argument, though, is that a criminal, especially a violent or hardened criminal, may just make anyone who’s open carrying their first target. It’s important to remember that in these scenarios, we’re always operating from the defensive, not the offensive. Many times, we will not have a heads up that a crime is about to take place, or that criminals are scoping out the joint and may have already picked us out if we’re open carrying.

There are some safety concerns of open carry as well. Just consider the fact that 8% of police officers killed in the line of duty between 1994 and 2003 were killed with their own firearm and you'll understand why it's important to have complete situational awareness should you choose to broadcast the fact that you are carrying a gun. In a similar vein, while everyone knows that police officers have at least one gun on them at all times while on duty, and that gun is visible to the public, they still become targets for violent attacks.


Also, just because open carry is legal is a state doesn't mean you are going to avoid run-ins with the law. Open carry long enough and you're bound to have someone call 911 on you, and police officers don't always respond so well even in states where open carry is completely legal. I’ve seen this happen with several friends and colleagues, and it’s never a comfortable affair.

Compared to open carry, concealed carry can sometimes be a hassle. Concealing a weapon in a way that no one knows you are carrying isn’t always easy, especially in warmer weather where light apparel is called for. While obtaining your concealed carry permit provides you with valuable training, carrying concealed often ends up being so uncomfortable that some gun owners choose to not do it at all.

In an effort to completely conceal their weapon, some people are forced to sacrifice either comfort, accessibility, or both. Firearms that are in direct contact with skin can cause discomfort and sweat from your skin can corrode the metal on the gun. Firearms that are stored in a backpack or a purse are also not nearly as easy to draw as a weapon that is sitting unobstructed on your hip, and in an emergency situation, seconds count.

That being said, the biggest advantage of concealing your weapon is the fact that any threats you encounter won't know you are carrying a weapon. This gives you an element of surprise and eliminates the risk that they will try and take it from you before you are able to draw it.

If you do it right, no one knows you have a weapon on you. For most gun owners, maintaining this unobtrusive, low profile is a priority. That's why those who concealed carry currently far outnumber those who open carry, even though in most states open carry doesn't require any special permits and concealed carry does.

Lastly, the fact that concealed carry requires you to obtain a permit has its advantages as well. Requiring those who concealed carry to obtain a permit ensures that they have at least some degree of training with their firearm, making them both safer to themselves and those around them while increasing the likelihood that they will be able to successfully defend themselves should they ever need to.

In the end, the decision to carry open or concealed is dependent upon your state laws and your personal preference. There are many people who choose to only open carry, and there are many more that choose to carry concealed. At Urban Carry, we make a holster for every type of concealed or open carry, whether that’s the Below the Waistband G2 holster, or our Outside the Waistband REVO holster system. Whichever way you choose to carry your firearm, we've got you covered.