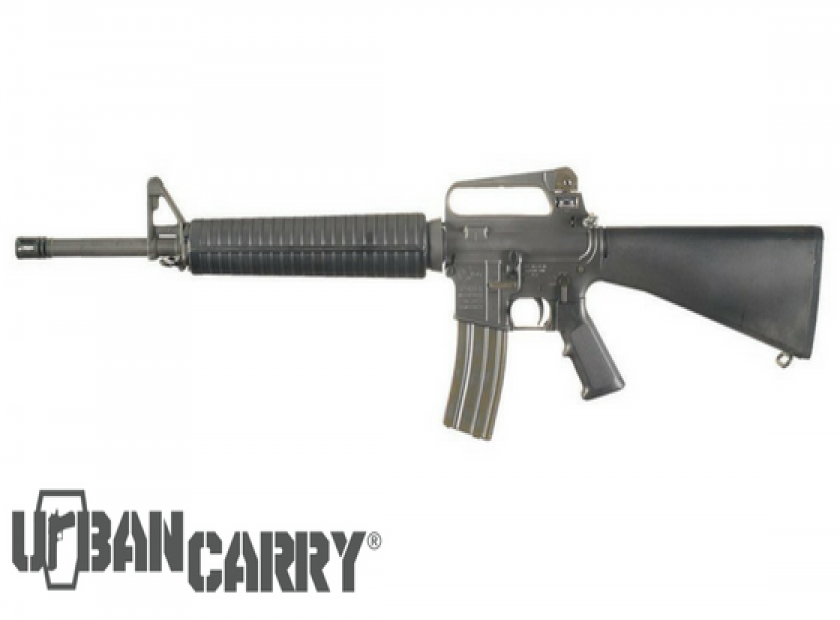 The AR-15 - America’s modern sporting rifle that spawned the design of so many “black rifles.” The AR-15 also happens to be the maligned nemesis of gun control advocates, creating such a fervor of misinformation around it that the mainstream media now uses inaccurate terminology to describe the AR-15 (and its variants) on a regular basis.

What was originally designed as an innovative approach to sporting rifles has become a subject of constant political debate, and the AR-15 design has become a love it or hate it firearm, depending on which side of the fence you sit on. We’re going to leave the politics out of this article, and simply give you the facts on the AR-15 - what it is, what it isn’t, where it came from and where it’s going.

When Eugene Stoner and ArmaLite debuted the AR-15 in 1958 as an “I have to carry this thing for 10 miles” friendly update to the M1 Garand, the modern design and materials raised quite a stir in the civilian and military firearms world. Made from aluminum and plastics, the AR-15 was much lighter than the Garand and the M14.

What does AR mean?

For those of you in the know, you may have already stored this in your brain housing group, but for those unfamiliar with the AR-15, here’s a little piece of info for you:

AR is simply a corporate designator, the same way G19 stands for Glock 19. So, for future reference, AR does not mean Assault Rifle or Automatic Rifle - anyone who tells you otherwise is simply uninformed.

There are numerous “ARs” out there, in many different size, function and caliber variations - to include the AR-17, which isn’t even a rifle, but shotgun, or the AR-7, a .22 caliber survival rifle.

As you can see, a little bit of education makes the scary buzzwords “AR-15 assault rifle“ sound ridiculous. An assault rifle is a weapon capable of a fully automatic firing selection, something unavailable to the general public since 1934.

An assault weapon, another favorite term of gun control proponents, doesn’t actually have a solid definition. Assault weapon is as vague a term as high capacity magazine, and many states have varying definitions of what constitutes an assault weapon.

Some people contend that the terms assault weapon and assault rifle originated in the 1980s by California anti-gun legislators seeking to ban semi-automatic rifles with a militaristic appearance.

While the AR-15 and its variants look similar to the M16, they are very different when it comes to their inner workings. The most important difference is this: the AR-15 is a semi-automatic weapon, while the M16 is either a fully automatic or burst capable weapon.

If you ever need to differentiate an M16 from an AR-15 just by looking at them, here’s an easy way: Look at the selector switch. If the selector switch has two options, Safe and Fire, then it’s (probably) a semi-automatic AR-15. If there are three options, usually Safe, Semi and Auto/Burst, then more than likely it’s a variant of the M16.

Semi-Automatic: 1 pull of the trigger = 1 round fired

Automatic: 1 pull of the trigger = multiple rounds until trigger is released.

Here is a fantastic video going over the difference between automatic and semi-automatic firearms:

The difference is inside the weapon, in the lower receiver. These mechanics are not visible without opening the firearm up, and the cosmetic similarities often confuse people.

This is why some in the news media will call a firearm like the M&P10 .308 Camo an “assault weapon,” when in reality these are hunting rifles, no different in their purpose than your Granpappy’s Savage 99. While they’re different in functionality and modularity, that’s called progress utilizing modern design and materials.

Would we fault a new model of the Ford Mustang for being faster, more customizable and better looking than the Model T? No, of course not - we love the improvements, even though the increased performance warrants greater training, skill and responsibility.

Variety is the Spice of Life

The AR-15 design and subsequent platforms are extremely popular for a variety of reasons. The platform is incredibly versatile in its modularity, allowing the user to set the firearm up for a variety of uses. For example, a person with a standard AR-15 can purchase a simple kit that allows them to fire .22 LR ammunition. This change allows the user to hunt different game with the same firearm, or practice their shooting technique with less expensive ammunition.

Likewise, there are other conversions that are relatively easy such as changing to a heavier barrel and long-range optics for varmint hunting or competition. The same firearm, when equipped with a shorter barrel, different optics and a flashlight, becomes a tool for home defense.

The AR-15 design is also extremely ergonomic, made from lightweight materials and offering a comfortable rear pistol grip and additional grips for the stock. Some AR-15 aficionados  affectionately label the AR-15 platform the “LEGO gun,” since you can build it pretty much any way you’d like.

Variants of the AR-15 also come in a variety of calibers, enabling different applications such as hunting large and small game in different terrain, target shooting, competition, as well as law enforcement and military applications.

Here are just a few of the calibers that AR platforms are chambered for:

The AR-15 has certainly had its share of ups and downs. Banned here in the U.S. from ’94 until 2004 under former President Bill Clinton, the AR came back on the market and with it, a vast number of improvements.

Still a topic of debate on the Hill, the AR-15 and all its cousins seem to be fairing well with the public, and the AR is finding itself defended against further legislation at the time of this writing.

ArmaLite will forever hold a place in firearms history with the AR-15. A breakthrough in rifle technology, the AR platform will serve as the base for tactical and sporting rifles for years to come.